I am not going to provide a lot of answers today, but I think I will pose some of the right questions for us to consider as JVP and as individuals. Let’s think about the current political context for our work and how we might effectively respond.

This is obviously all quite bracing, overwhelming. Unfortunately, it is also real. The questions for us: are: how does our work connect to any or all of this? What work and organization is required? Who might be our allies? What new formations or coalitions would be helpful? What other work might we/should we connect to? I am not making an argument to pull back on Palestinian solidarity work, but rather thinking about how to connect our work to other necessary progressive movements and to the anti-fascist movement as a whole. Palestinian solidarity work needs to be a part of a larger movement.

If any of this resonates, what might this mean in practice? 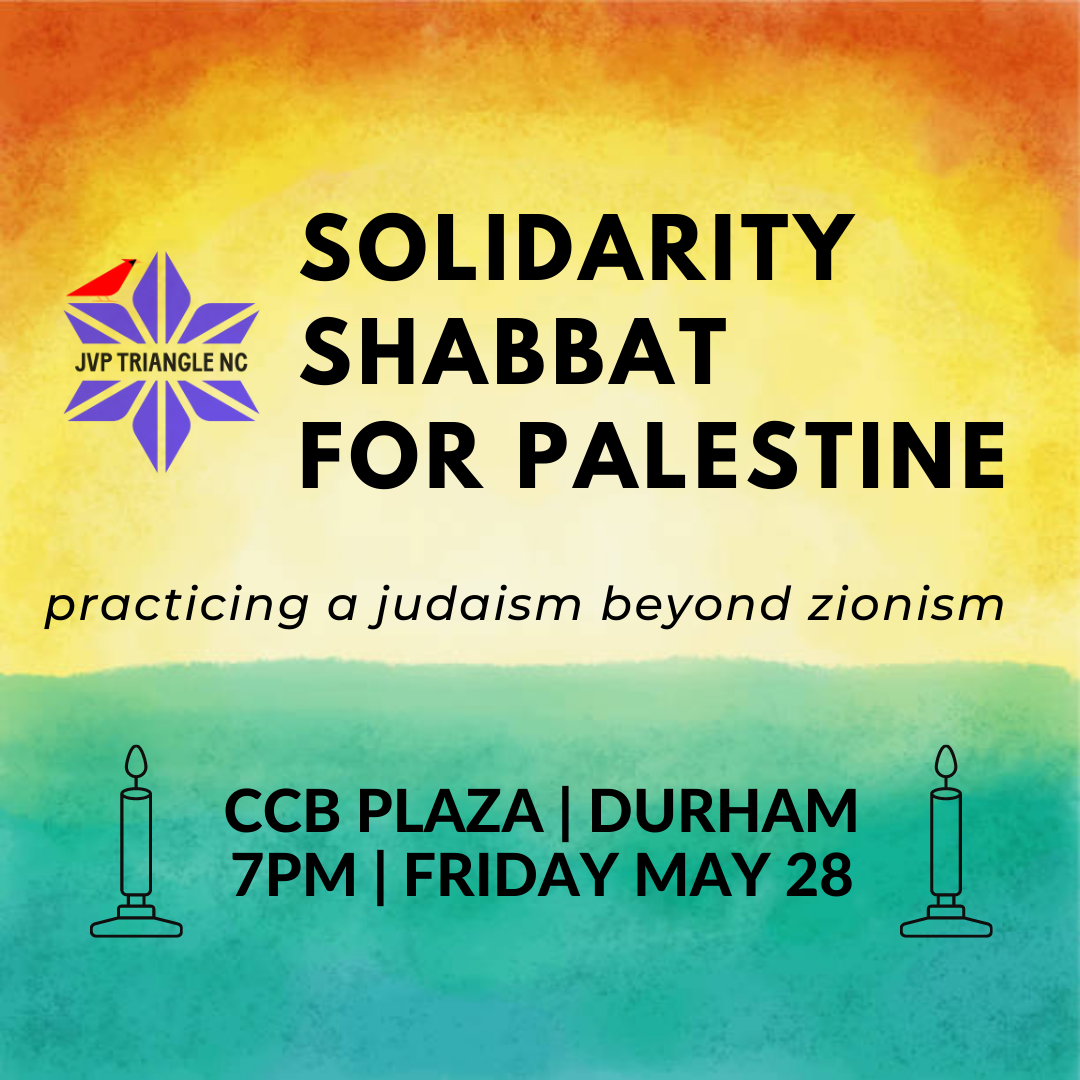 Sign the Pledge: A Call for Jews to Endorse Boycott, Divestment, and Sanctions

Please learn more and sign the petition at https://facebookweneedtotalk.org/

JVP Triangle NC demands the resignation of seven members of North Carolina’s congressional delegation who voted to object to the election certification. We join a growing chorus of constituents and organizers across the state to make clear that Dan Bishop (NC-09), Madison Cawthorn (NC-11), Virginia Foxx (NC-05), Ted Budd (NC-13), Richard Hudson (NC-08), Gregory Murphy (NC-03), and David Rouzer (NC-07) aligned themselves with and energized a white supremacist, authoritarian insurrection on January 6th. These seven members have forfeited their right to represent the people of North Carolina.

As anti-fascist Jews and allies, we are particularly concerned about two members of North Carolina’s delegation who openly associate with right-wing, antisemitic causes while embracing Christian zionism. Dan Bishop (R-09) invested in Gab, a social media platform popular among neo-nazis, including Robert Bowers, the man who murdered 11 people at a Pittsburgh synagogue. Madison Cawthorn (R-11) has openly admitted to trying to convert Jews to Christianity and has espoused antisemitic conspiracy theories. Both of these men have voiced strong support for the state of Israel. To us, this is neither surprising nor a contradiction. Christian zionists often voice support for Israel while espousing antisemitic conspiracy theories–in fact, some waved Israeli flags at Wednesday’s insurrection. The U.S. Jewish establishment can no longer ignore the fact that pro-Trump white nationalists support Israel on the basis that it is an apartheid state.

On Wednesday we witnessed white Jews, including Aaron Mostofsky, the son of a Brooklyn judge, marching with insurrectionists carrying the Nazi flag.The day provided a clear example of the growing trend of white Jews who are emboldened by Trump to embrace white supremacist violence. This trend occurs within the historic context of anti-Blackness in predominantly white Jewish spaces. We call on white Jewish people to align with Jewish people of color and others targeted by white supremacy, not with white supremacy and fascism.

There is no denying that the white nationalist movement is organized and prepared for another violent coup attempt during the Inauguration. We are committed to deepening our solidarity with all those who oppose fascism in the U.S. and abroad, and know that the time for organizing to oppose fascism is now.

In case you missed it, op-ed by Carol Prince, Sandra Korn, & Emerson Goldstein published in the Indy on November 25, 2020:

We’re doing stuff every night at 6:00 pm Eastern. Reach out or check your email for a zoom link. Here is a link to the zine we put together.

Consider donating to projects like Mutual Aid for Palestinians’ “Oxygen for Gaza” appeal in conjunction with the Jewish Voice for Peace Health Advisory Council for CPAP respirators and other support for Gaza.

Here are links to the dreidel games I (Beth) programmed. (They need to be played on a computer.):

Check out our 5781 New Year’s greeting with links to music and poetry.