JVP Triangle-NC is so proud to host two amazing student fellows this summer. Meet Noah Byck Mlyn and Davia Young, who will be working on projects for our chapter and BDS coalition throughout the summer:

My name is Noah Byck Mlyn and I just finished my first year at Vassar College and will be transferring to Brown University in the Spring after a semester off. I was fortunate to be a part of a vibrant Students for Justice in Palestine chapter at Vassar as well as a new, quickly growing JVP chapter. We successfully passed a BDS resolution in our student association which was unfortunately overturned by referendum. Vassar is generally a very progressive campus, and getting the chance to work with members of student government who were excited to learn about opportunities for solidarity and resistance was inspiring. A challenge we encountered, and what eventually led to the resolution’s failure in a school-wide referendum, was the emphasis by students and administrators on “dialogue” in place of real political action..

I am excited to be working together with Davia Young in Durham, NC this summer where we will be working on a BDS resolution to be presented to the city council as well as various smaller projects focusing on chapter membership retention and publicity. We are also helping to organize the monthly chapter meetings centered around a specific topic relevant to our movement. Aside from my activism, I am also a college debater and an actor. 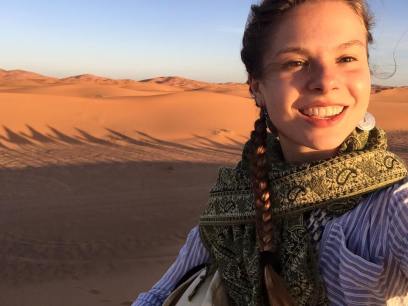 My name is Davia Young, I live in Durham, North Carolina and go to school at Guilford College. I major in Community and Justice Studies and minor in Environmental Studies and Women, Gender, Sexualities Studies. I just spent a semester in Morocco studying Arabic and human rights/multiculturalism, and am going to spend this summer working with the North Carolina Triangle Chapter of Jewish Voice for Peace with Noah Byck Mlyn. Our main project with the Triangle JVP is to draft a BDS resolution to be presented at the Durham City Council, as well as smaller projects like promotional material and membership retention.

I was really involved in my Jewish youth group and community in high school but never really felt like I connected with people on Israel/Palestine politics, and my sophomore year of college I got to spend a month in Israel/Palestine where I had a radical awakening when I realized there was an entire discourse that I was not exposed to as an American or as a Jew, and that being Jewish did not have to mean being Zionist. After a long personal journey I felt it important to continue the fight for Palestinian freedom and against the Israeli occupation within the Jewish community, which led me to JVP.

My school is quite small but we have an active SJP and after a long process for Open Hillel now have a Jewish group called Chavurah, but no JVP chapter yet. Along with my other work, I am the president of the Ultimate Frisbee team, DJ at my college radio station, and am the president of Guilford Peace Society, a club that organizes around local and national social justice issues.